The ability to charge your favorite smartphone without using a wire, appeared relatively recently and immediately attracted a lot of attention. The first wireless chargers appeared with the new models from apple. A little later, they began to be produced for new smartphones based on Android, but in this case they were not very popular.

In order for the phone to be charged from a wireless charger, it actually needs to have a glass case. This is done because the glass is able to pass energy that will power the battery.
The technology of functioning of such chargers is based on electromagnetic induction. By means of an electric current, a magnetic field is created first, and then a voltage appears, which charges the phone.

Most consumers warmly accepted the innovative development within the framework of chargers. However, research shows that at the moment only about 30% of those who have this model use it.

What is the reason for this

In fact, the phone itself is not connected to the charger via a wire. However, the charger itself must be connected to the power supply for the charging period. Thus, it is not much different from the standard type of charging. Moreover, the electromagnetic induction method cannot provide enough voltage to compete with wired charges. Thus, wireless accessories charge your smartphone much longer than classic solutions.

Manufacturers claim that innovative technologies can save a lot of time. On the one hand, it is really convenient, for example, the model that is made in the form of a stand will be popular in the bedroom. You don’t have to take your phone off the stand to see the time, it’s easy enough to turn off the alarm.

However, in virtually all other possible areas of life, users still prefer a regular charging cable. And this is quite seriously justified. Very often, you need to ensure the maximum charging speed when there is not enough time for a full session. In this case, the wireless accessory will not help, and it is unlikely to be able to charge the device at least a quarter before leaving the house.

This combined wireless charger and UV sterilizer in one makes the smartphone charging and cleaning process completely hassle-free! The device supports charging and is compatible with the most popular phone models, the intelligent recognition function also allows it to sterilize other small items such as headphones, children’s toys, glasses, watches, jewelry and more without unnecessary charging.

Moreover, although it is called wireless, it still has to take power from the power grid through a cable.

Find it here https://mo.ma/3dAwax6 When placed on a surface anywhere in your home or office, this sleek design resembles a minimalist vase—but the Lexon ... 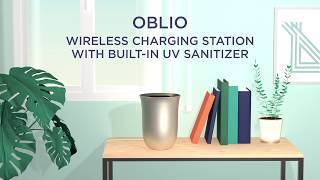